info@ruex.net
From Siberia to Mongolia
to meet Golden Eagle hunters
Drive through the spectacular Altai mountains to visit Golden Eagle festival, meet with nomads, and see the golden autumn in the mountains
The best time to go is from second half of September to beginning of October
We recommend at least 8 days for this tour with possible extensions to 10 days or more
This tour is private-only: you can come alone, with a family or group of friends
Season: September-October
Duration: 8 days or more
Price: from USD 2550

The tour goes through remote locations, but there's no physical requirements
Difficulty: easy 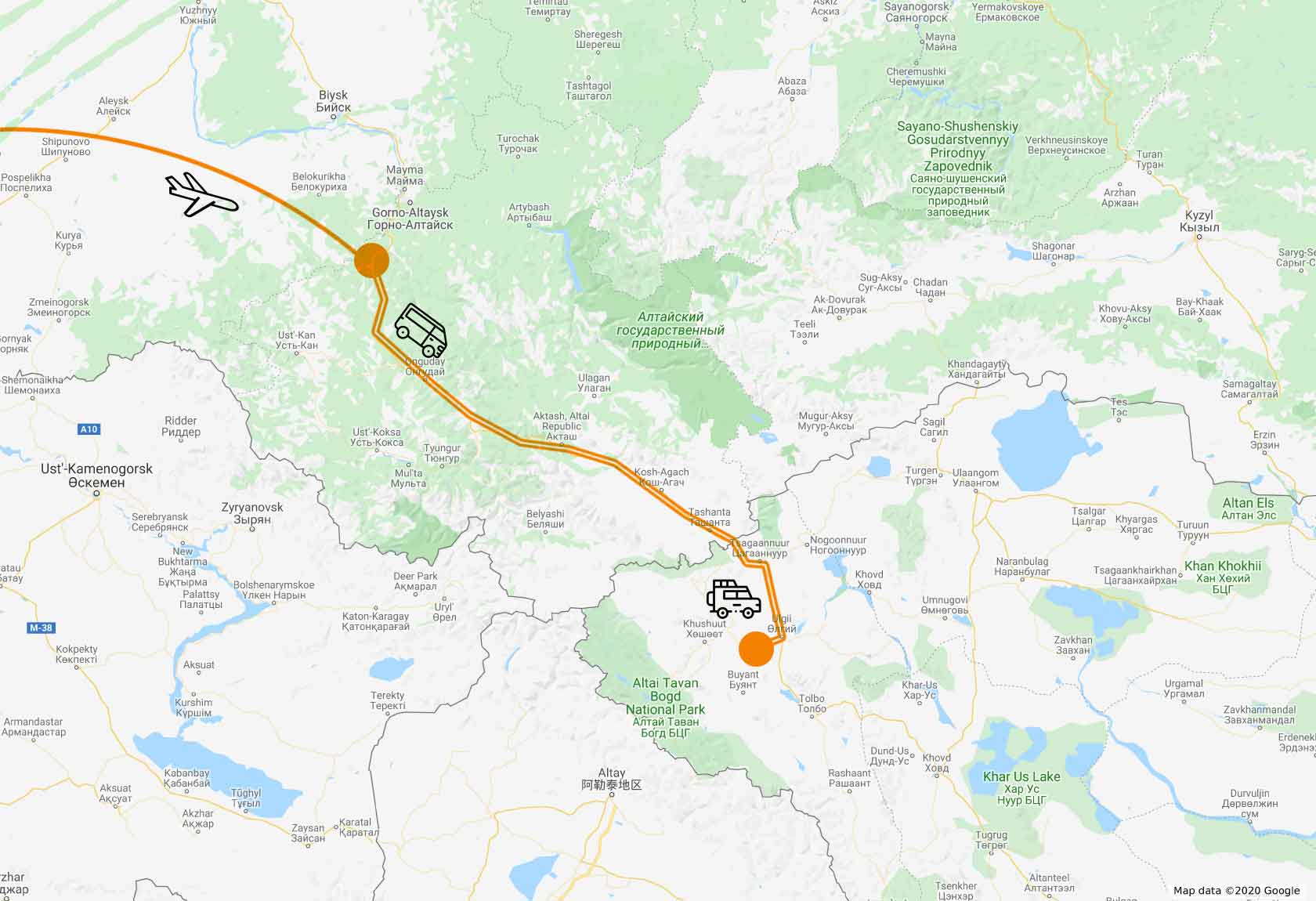 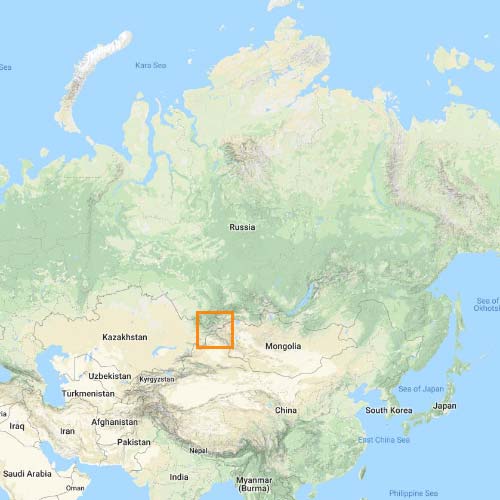 Countries: Russia, Mongolia
Trip length: 1300 km
Airport of arrival/departure: Gorno-Altaisk (RGK)
The idea of the trip
Meet Golden Eagle hunters and nomads in the most remote region of Mongolia, travel through the Altai mountains during the most spectacular time of a year
Where do we go?
1. Mongolia. During September and October Western Mongolia hosts an unique event - the festival of Golden Eagle hunt. This is one of the most authentic events in Asia, when Eagle hunters from all over Western Mongolia gather together to find out who has the strongest skills and understanding with the eagle.

Western Mongolia itself is a very remote destination, a home to people who preserved the nomadic lifestyle of past centuries. Golden Eagle festival makes this place even more special - it is one of just two places in the world where people preserved falconry traditions in their everyday life.

Western Mongolia is a filming location of "The Eagle Huntress" about Aisholpan and her dream to become the huntress. Jimmy Nelson filmed Golden Eagle hunters for his book "Before They Pass Away".

We will spend two days at the festival, see traditional games of Kazakh people, and then drive around the Altai mountains, meeting herders and Golden Eagle hunters in their homes.

2. The Altai Mountains. Second half of September and first half of October is the most spectacular time in Southern Siberia and the Altai mountains. This is the time when larches turn yellow, mountains get covered in fresh snow, and nights become dark - best time to see the starry sky far from the cities.

That's why we've created the trip that combines a visit to the Golden Eagle Festival in Western Mongolia, and the Altai mountains during the Golden autumn season.

We recommend to spend at least one week here, with a possibility to extend the trip to two-three weeks.

During this time you will see the most spectacular locations and meet incredible people - throat singers, artists, nomads and, of course, Golden Eagle hunters.

What we will do during the trip?
Why is it important now?
Western Mongolia is a remote location, where people keep their traditional lifestyle for centuries. However, today globalization makes it very fragile: people move to bigger settlements, traditional costumes disappear under the influence of cheap clothing, Chinese corporations increase their presence in mining industries. Within last decades we saw the change in everyday life of local people, and we encourage you to visit those who still care about the traditions of their ancestors.
Where we will stay?
During the tour we mostly stay in remote locations. On the way to Mongolia we will spend the night in Kurai village with spectacular view to ice-capped peaks of the Northern Chuya range. It is a village guesthouse with Russian banya (sauna). During the Golden Eagle festival we will stay in local hotel (rooms or yurts, depending on availability — we encourage you to book early because the availability is very limited during the festival days). After the festival we will visit a hunter's family and stay in yurt — just as locals live. And on the way back we will spend a night in the hotel next to Katun river.
How we drive/walk around?
On paved roads we drive with minivans or SUVs. Usually it is Toyota Hiace, Mercedes Istana, Huyndai H1, Mitsubishi Pajero and others. In Mongolia we will use offroad UAZ minivans.

On this trip we don't hike much - mostly just easy walks to interesting places and on the festival. In the Golden Eagle hunter's family we ride horses (optionally).
Who can join the tour?
We run tours for people who like exploration, nature and travel to the most beautiful and remote locations.

This trip doesn't require any special training, but it runs through the remote locations and big cities - we expect you to be ready for the adventure. During the trip we will drive through the mountain passes under 3000 meters above sea level. We recommend to take sleeping bags with -5°C comfort temperature: autumn nights may be cold.
How to receive more information and book a tour?
Fill the form below and we'll send you more details.
Day-by-day itinerary
Scroll right to see the example of tour schedule day by day. We suggest a minimum of 8 days for this tour, while encourage to spend 10 days or more.
Day 1. Arrival to the mountains
We meet at the airport of Gorno-Altaisk (there are flights of "Pobeda" and S7 airlines from Moscow with reasonable prices) and go on the Chuya highway, the ancient caravan route from Russia to Mongolia. National Geographic Russia included this road in the list of the most beautiful roads in the world (and I'll show you why).

Along the way we will see:

Day 2. Crossing the Mongolian border
We start early in the morning to be among the first on the border. The distances are huge, so we plan a full day for the border crossing. Finally after the lunch we are in the country of nomads and golden eagle hunters. Our stop for the night is Ulgii - a small, but authentic border town, where the Golden Eagle festival starts on the next day.
Days 3-4. Golden Eagle festival
The main competition of the year for Golden Eagle hunters. Presentation of participants, the first competition among hunters and meeting with the traditions of the Golden eagle hunting. The festival is a series of traditional competitions, coming from the ancient times. Each competition has its own history. We will see how the hunters use their voice to summon the eagles, as well as other nomadic games.
Day 5. Visit the hunter's family
Today we will visit nomads and Golden eagle hunters to get acquainted with their way of life and talk in cozy home environment. Overnight in nomadic yurt.
Day 6. Return to Siberia
Early morning departure from Ulgii to the border. We cross the border with Russia and arrive in the Kurai steppe with a magnificent view of the Northern Chuya range.
Day 7. Chuya highway
Along the way, we stop in beautiful places for photoshoots, and go to visit kaichi - throat singer, who will talk introduce you to the folklore traditions of the Altai people.
Day 8. Flight to Moscow
Departure from Gorno-Altaisk airport and flight to Moscow
Additional days
While 8 days is minimum for this trip, we suggest to spend a bit more time to drive around the Altai mountains. Here what we can do during extra days:
Who is leading the tour?
Alex Permyakov
Russian Expeditions founder
Experienced explorer and photographer, Alex was born in the Altai mountains and spent his childhood there. Since then, he's been working with National Geographic, Discovery Channel, The Travel Channel and other major media around the globe. He's been leading expeditions to New Guinea, Tibet, Patagonia and other remote locations on Earth. He works with Mongolia and Altai for more than 15 years.
Visit the places
that are not on tourist maps (yet)
Spend your next vacation
in amazing places before they are discovered by tourist crowds
Ready to plan your trip?
Message us, and we'll help you to get ready for the adventure
Do you have any questions?
Alex Permyakov
Russian Expeditions founder
WhatsApp: +7 999 229 3044
E-mail: alex@alex.travel
Get new travel ideas and event announcements into your inbox
Subscribe to our newsletter - we send only meaningful updates about not-to-miss events and travel ideas
We are online
Contact us
Message us and let's plan your next adventure
WhatsApp
Messenger
Mail
Made on